View source
watch 01:54
Obi-Wan Finale - The Loop
Do you like this video?
Play Sound

Unobtainable
This article is about content that is unobtainable, only players who previously unlocked this can use it. This means that the season, event or gamemode this content was exclusive to, has been removed.
This content was obtainable from October 23, 2021 - December 17, 2021

A powerful ancient warrior that uses electric-charged throwing spears to destroy his enemies.

Spear
Ares is a kit that was added in the October 23, 2021 update. His special items are Spears.

Ares can buy a spear for 30 Iron

in the Item Shop which he can aim and throw at the target area. Upon impact, it does 65 damage and considerable knockback to all enemies in a small radius. The explosion can damage you as well.

Players cannot have more than 5 spears in their inventory or hotbar. 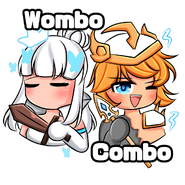